Hi all. For this update I’ve been continuing to work on the game room in the launcher.

The launcher now shows game settings, though you can’t currently change them. None of these settings are actually implemented yet in RWE, so changing them wouldn’t have any impact anyway.

The launcher now also allows you to select the map, and you’ll be playing on the correct map when you launch into RWE. Internally, the launcher is able to load the list of maps by communicating with a special bridge program, written in C++, that makes use of RWE engine code to answer queries from the launcher. Right now the launcher just uses it to get a list of the available maps, but this will hopefully expand to include more map info and possibly other things.

The player slots have also been improved. You initially start with a number of open slots depending on the number of players you chose when setting up the room, but you can open and close slots as you like after that.

You’ll have to forgive the rough layout of everything so far, I expect to tidy this up significantly at a later date.

Today you get two pictures, one still image showing the new game settings and one animated gif showing the map selection dialog. The mysterious box on the right will eventually display the minimap.

Next time I will aim to finish off the map selection screen with the minimap and map info. Once that is done it will be time to start thinking about the next steps for the engine itself. 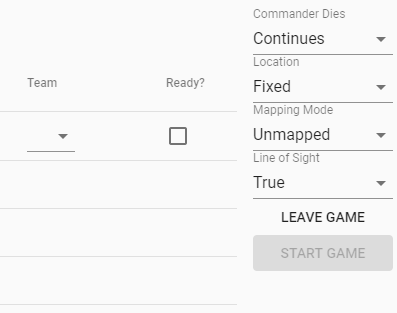